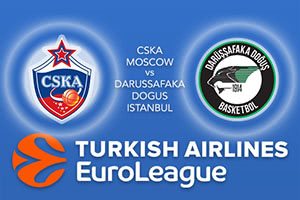 The hosts have booked their spot in the Euroleague playoffs and while it looks as though they will grab home court advantage for the next stage of the tournament, there is still a bit of work to be done. As for the Turkish side, there is a lot more work to be done as they are currently outside of the playoff zone but they aren’t far from it, which means that they need to grab wins in the final four games of the regular season.

These teams have only met on three occasions in the Euroleague and when they clashed earlier this season, the Turkish side came out on top for the first time. CSKA won the previous two clashes but a 91-83 victory in Istanbul meant the Darussafaka fans had a fantastic evening. James Anderson was in fantastic form in that game, providing 20 points in the victory.

The hosts have the best offensive record in the league, offering an average of 87.3 points per game, and if they find form, it could be a tough night for the side from Istanbul.