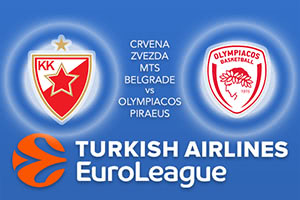 We are in the home straight in the Euroleague and both of these teams are well placed for this stage of the campaign. The away side have booked their place in the Euroleague playoffs and while the hosts are closing in on it, with a 15-11 record, they cannot book their place in the next stage of the Euroleague this week, even if they grab a win. Both of these teams have a strong defensive record, with the 74.2 points per game allowed by Crvena going up against the 73.7 points permitted per game by the Greek side. This may mean this is a low scoring game but it should be an intriguing match.

The hosts have never defeated their Greek opponents in the three games that the teams have played in Europe this century, so that alone would be a big incentive for the Belgrade side going into Wednesday night’s clash. The previous meeting this season ended in a 73-65 victory for the Greeks, and a key player was Matt Lojeski, who provided 18 points in that win.

The Greek side do have the motivation of home court advantage to play for, so there is something at stake for both sides but the Belgrade side know how close they are to securing their spot in the next stage of the Euroleague. Passage to the next round will be a great success and the home fans will do all they can to cheer their heroes forward.

Given that there is slightly more at stake for the hosts, it is understandable why a lot of people are tipping them to edge it, but it should be a close game. With this in mind, you should look to back Crvena Zvezda mts Belgrade at -2.5 which is provided at odds of 1.90. With the defensive record of both teams, it is reasonable to assume that this will be a game of few points, particularly when compared to some of the games taking place in the Euroleague this midweek. You should therefore take UNDER 146.0 at odds of 1.90 with the Over/Under market in this game. Bet Now!