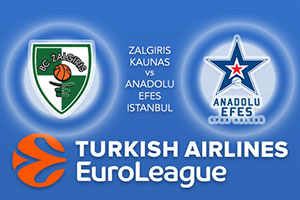 The hosts are two spots outside of the Euroleague playoff zone and the away side occupies the final space in the playoff spots, so you know this is going to be an electric night in the Euroleague on Tuesday. The hosts know that they have a great chance to create real pressure on Anadolu and while absolutely nothing will be decided by the end of the his game, the winner will feel that they have made a real statement about what is going to happen in the final few games of the regular season.

These teams have met on nine occasions in the Euroleague this century, so with the 10th tie looming, a lot is at stake. The side from Kaunas has a slight edge, having won six of the nine games so far and they will be desperate to grab a seventh victory over their Turkish rivals. In the previous meeting this season, Kaunas grabbed an away day victory, clinching the points with a 71-84 score line, and this could prove vital by the end of the season. Kevin Pangos had a brilliant evening on that occasion, offering a total of 15 points.

This should be a close game but there is no reason why the Turkish side cannot prevail. Take Anadolu Efes Istanbul at +2, at odds of 1.90. For the Over/Under market, go OVER 157.5 at odds of 1.90. Bet Now!