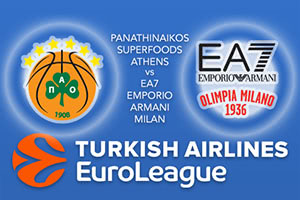 The away team are out of the running as far as the Euroleague playoffs go but the hosts are still looking to clinch their spot in the next stage of the tournament. They should do this soon and a win against Milan would be virtually all the Greeks need to extend their season. There is a requirement for other results to go in their favour this midweek to have everything rubber-stamped but you can expect Panathinaikos to keep their eye on the ball and focus on what they need to do this week.

These sides will clash for the 12th time in Euroleague action this century and in the 11 games that have been played so far, it is the Greens that hold the advantage, having won eight of these clashes. The last time these two teams met, it was in Milan, and it was an away win thanks to a 72-86 win. There were 19 points and 7 rebounds from Mike James on the way to the Panathinaikos victory and he has been a key player so far this season. With a total of 12.8 points per game so far this season, James has led the way for Panathinaikos on many occasions and you can expect him to have a say in how this game unfolds.

Milan have not enjoyed the Euroleague this year