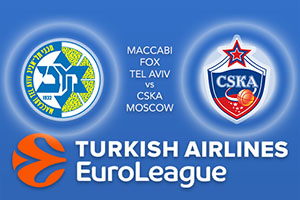 The hosts have a temporary coach in charge for this game and they will hope that they get the lift teams sometimes receive when a new or different coach is in charge. Maccabi currently hold a 5-7 record and they couldn’t face a tougher task in this game. This is because CSKA Moscow are in town on Wednesday night and the Russians carry an 11-1 record, so the reigning Euroleague champions are still on fire in this game.

This is a game between two sides who have a big history of playing each other. The sides have clashed for more than 40 years and the record between them stands at 19-19, which shows how strong these two teams have been over the years. CSKA have won the two title games between these sides but when Maccabi defeated Moscow in the semi-finals, in 2004 and 2014, they went on to lift the title.