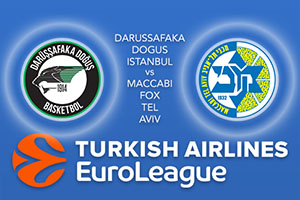 The hosts have won their two most recent games, including an Istanbul derby win over Fenerbahce and it is likely that confidence will be high in the side that carries a 7-6 record into this game. Darussafaka welcome the Israeli side Maccabi FOX Tel Aviv, and the away team brings a 5-8 record into this game in Turkey on Friday night. These two sides have clashed on two occasions in the Euroleague and the record stands at one win each.

The big win over Fenerbahce will have lifted Darussafaka spirits and the team will be determined to maintain the momentum they have developed in the past week. One player that has been essential for the Istanbul squad so far this campaign has been Brad Wanamaker and he has provided an average of 14 points per game. Other players that have stepped up to the plate include Will Clyburn, who has averaged 13.7 points per game while Scottie Wilbekin has offered an average of 10.5 points per game. These are the players that can make a difference in this match and when it comes to getting the Turkish fans off their seat, these are the players that the home fans want to see in full flow.

Maccabi are struggling in Euroleague

Given the form of both sides, you have to say the hosts are favourites with a bit to spare so take Darussafaka Dogus Istanbul at -6.5 which you can find at odds of 1.90. When it comes to the Over/Under market, look to go OVER 157.5 at odds of 1.90. Bet Now!