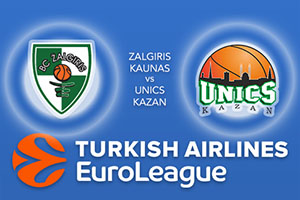 Both of these teams are firmly in the bottom half of the Euroleague with the away side sharing bottom spot. The hosts carry a 5-8 record into this game but the fact that Zalgiris grabbed a big win in Istanbul on Tuesday night will likely give them a great deal of confidence for this game. Unics Kazan currently hold a 4-9 record, but they also won on Tuesday night, and they will be desperate to grab a win. These two sides have clashed twice in the Euroleague and the spoils have been split with one victory each.

The 71-84 win over Anadolu was a fantastic achievement for Kaunas and the home fans will ramp up the volume to back their favourites in this game. A win could propel them into the middle of the table, allowing Kaunas to look upwards as opposed to over their shoulder. Brock Motum has been in fine form this season, offering an average of 13.2 points per game this campaign while Paulius Jankunas has also chipped in with an average of 12.8 points per game. These are the only two Kaunas players who have reached double figures this season with Leo Westermann coming in at 9.6 points per game.

A possible issue for the Kazan side in this game is the fitness of Keith Langford. Langford was absent on Tuesday night so the fact that his team-mates won without him proves that his absence isn’t a total disaster but he is a player that Unics want playing. This is because Langford is the top scorer in the entire Euroleague with an average of 23.8 points per game. If Langford is absent, a lot of focus will fall on Artsiom Parakhouski, who has averaged 11.2 points per game. Quino Colom is another player who will be asked to step up and he will want to improve on his record of 10.6 points per game.

One thing to note for this game is that both teams have similar records for defensive and offensive play, so this could be a tight match. Take Unics Kazan at +5 at odds of 1.90 for this Euroleague game. If you’re looking for the Over/Under market, go UNDER 162.5 at odds of 1.90. Bet Now!