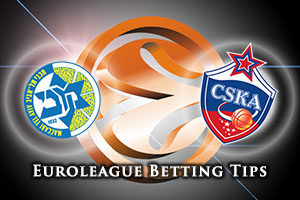 This is a game between two teams with a great history in the Euroleague but at the moment, their fortunes couldn’t be more contrasted. The hosts are sitting with a 1-4 record so far in the campaign and they have just appointed a new coach in the past week. The away team have a 4-1 record but they do come into this game on the back of their only defeat so far of the campaign.

Will the appointment of Zan Tabak provide the Tel Aviv players with a lift on Thursday night? It is a difficult one but the coach who will be taking charge of his first Euroleague game since the 2012/13 season, when he was in charge of Laboral Kutxa Vitoria, will need to hit the ground running. He’ll have the support of a passionate crowd, which will help but there will be a lot of focus on Taylor Rochestie and Jordan Farmar to provide the points that will see Maccabi creep up towards the Top 16 qualification positions. Trevor Mbakew is one of the top rebounders in the league but there is a need for Maccabi to rebound quickly if they want to save their season.

CSKA Moscow have to bounce back from a defeat

CSKA Moscow destroyed the Israeli team in the opening weekend of the season, triumphing by a score of 31 points by the end of the night. This will provide comfort for the Russian side as they enter Israel but the Moscow team will want to bounce back quickly in this game after their loss last week. CSKA will still make their way through to the Top 16 but they’d rather have the spot tied up sooner rather than later so expect them to be firing on all cylinders in this game. Nando De Colo and Milos Teodosic will once again be at the heart of what CSKA does on the court.

You can find CSKA Moscow at -6, with odds of 1.90, and this is likely to be of great benefit to basketball betting fans on Thursday night. If you want to enjoy the Over/Under market, you should look to go UNDER 162.5 at odds of 1.90. Bet Now!