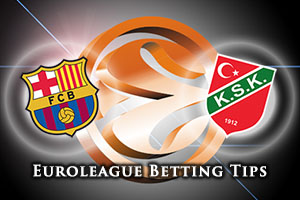 The Turkish champions enjoyed their Euroleague bow this season when they defeated the Catalan club but the hosts for this game will be looking for revenge. Barcelona have managed to hit good form since that loss, sitting with a 4-1 record in the Euroleague while Karsiyaka currently hold a 2-3 record at this stage of the campaign.

The opening day defeat to Pinar was a shock to Barcelona but they have shown that they can bounce back from adversity. You can never rule anything out in basketball but you have to think that the Catalan giants will be comfortable in their pursuit of a Top 16 place. For Barcelona, Justin Doellman has scored his last 17 free throws in the Euroleague in a throw and he has also managed to serve up a minimum of one steal in his last five outings in the Euroleague. Ante Tomic has been in excellent form this season and Juan Carlos Navarro keeps popping up his team-mates need him to.

The Turkish side need a win on the road

The Turkish team haven’t won on the road yet this season and they’ll face a difficult challenge in this game. Given that they are the lowest scoring team in the Euroleague, they need to keep things tight in defence and hope to improve their scoring form. This sounds like being a tough night but with players like Justin Carter, Josh Carter and Joe Ragland in their team, there is no reason why Pinar cannot enjoy more success than they have done this season so far. Whether Thursday night is the night remains to be seen but if they don’t start scoring strongly soon, they could be in trouble.