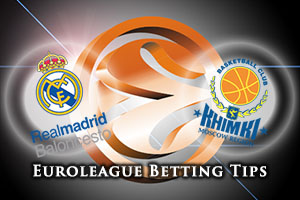 We have a Wednesday night game in the Euroleague at the start of Round 6, and these two teams served up an excellent evening of basketball at the start of the new campaign. That game was won by Khimki and in the 5 clashes between the two teams, the home side has been victorious in all of them, a statistic that Madrid will be keen to maintain.

It’s been a tough season so far for Real Madrid and they currently hold a 2-3 record. If they were to lose this game, they would be down in fifth place, which is outside of the Top 16 qualification spots. It would be unthinkable for the reigning Euroleague champions to fall at the first hurdle of their defence but it isn’t impossible. It is unlikely though and Madrid have managed to win their two home games so far this season. With players like Felipe Reyes, Gustavo Ayon, Andres Nocioni and Trey Thompkins on the frontcourt, Madrid should have enough about them to get something from this game.

Khimki dominated Madrid in the opening game of the campaign but they are yet to win away from Moscow season. With the home team having won all of their home games and the away team losing all of their away games, it is easy to predict how this one will pan out. However, the reigning Eurocup champions have caused a few shocks and surprises along the way and with Tyrese Rice looking to show what a big game player he is, the Moscow side will think that they have a chance of success in this game, even if it would plunge Madrid into a difficult position.

The betting sites back the Euroleague champions though and given their home form, taking Real Madrid at -8, at odds of 1.90 isn’t a bad idea. For the Over/Under market, you should be looking to take the OVER 167.5, at odds of 1.90, option. Bet Now!