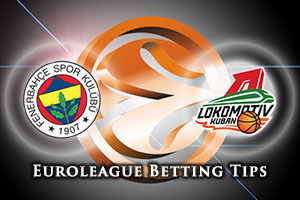 This may be the first time that these two teams have met in the Euroleague but it looks like being the game of the week. This is a match between two teams with a 2-0 record and when you take on board the fact that there are only three teams in the Top 16 with a perfect record after two games, this looks like being a stellar clash.

Not only do both teams have a 2-0 record in the Top 16, they both have an overall record of 10-2 in the Euroleague, with an 8-2 record being the outcome for both sides in the regular season. Fenerbahce have been in impressive form all campaign and Jan Vesely has been the key player for them this season. Mind you, he has been ably assisted by Ekpe Udoh and the team are ranked second in the Euroleague with respect to blocked shots. Even if these players don’t have their best nights, players like Bogdan Bogdanovic and Luigi Datome should ensure the home side keep pushing forward throughout the game.

Lokomotiv have been in excellent form so far this season

Lokomotiv have bene in excellent form defensively this campaign and they’ll be looking to maintain their shape and strength in Turkey on Thursday. Lokomotiv are the current leaders with respect to steals, with an average of 8.5 steals per game and they hold the second best defensive record in the entire Euroleague, with just 69.6 points per game having been allowed. Malcom Delaney has been on fire at the start of the Top 16, bagging back to back MVPs and another strong performance from him in Turkey could be the key factor in who claims a 3-0 record at the end of Round 3.

The bookmakers think that the hosts will take the spoils in this game but it may be worth taking Lokomotiv Kuban Krasnodar at +5.5 which is available at odds of 1.90. When it comes to the Over/Under market, bear both teams defensive strengths in mind and go UNDER 150.5 at odds of 1.90. Bet Now!