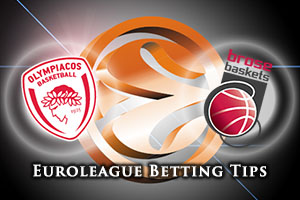 Whoever wins this game is likely to be at the top of Group F at the end of Round 3 in the Top 16. The hosts have a 2-0 record and will be confident going into this game but Brose Baskets will be feeling very confident after winning their first Top 16 game, which came after 21 losses in a row. They’d love to keep that winning run going in Greece this week!

The Greeks are going well this season with a 10-2 record and they’ll fancy their chances in this game. With Vasilis Spanoulis looking much more like his former self and players like Vangelis Mantzaris and Darius Jonson-Odom offering a lot to Olympiacos, there are plenty of reasons for the home fans to be confident in this game. There is also the fact that the Reds are currently ranked as the best defensive team in the league, offering up just 69.2 points per game, and you can see why there has been a lot to cheer for the fans of Olympiacos this season.

You have to give Brose Baskets credit for their performances this season. It is only after 2 rounds so far but they do lead the way in assists, with 21.5 assists per game, and true shooting percentage, 56.8%, in the Top 16 so far. Players like Nikos Zisis, Bradley Wanamaker and Janis Stelnieks have all been massive players for the German team this season. If they can put in big performances, especially Zisis who is likely to be up against Spanoulis, there could be a shock in store for the home fans on Friday evening. Ncolo Melli is another player that could have an influence on this game.