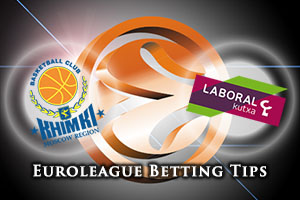 This is the first time these two teams have clashed in three years and given that both teams are currently on a 1-1 record in the Euroleague, they will both be desperate to grab a win in this game. The Spanish side have the slightly stronger record this season but Khimki have grabbed some big scalps and have made the step up from Eurocup very well this campaign.

With Paul Davis still absent for the hosts, James Augustine is expected to get more game time but it is the form of Alexey Shved that has grabbed most of the attention for the hosts this season. The fact that Khimki are ranked first with respect to blocks, an average of 5.08 blocks per game should see this game being an intense and tough affair. This is the sort of game that the Moscow fans love and the Khimki fans will be highly appreciative of their teams’ efforts this season, but they’ll be keen for the team to continue their form for as long as they can this season.

Laboral have plenty of strength

The away team have the best record, so far, for defensive rebounds and they also have the player regarded as the finest rebounder in the league, Ioannis Bourousis, who is averaging 9.2 rebounds per game. It is a team game though and Bourousis knows that players like Toko Shengelia and Kim Tillie will be on hand to help him out. Darius Adams and Mike James are likely to be the key players for Laboral’s offensive work and this game could be a fast-moving one. Adams has notched 16 consecutive free-throw shots and he’ll be keen to bring this consistency with him in Moscow on Friday evening.

The Moscow side are the favourites for this one and taking Khimki Moscow Region at -7.5 at odds of 1.90 is likely to be a smart move. When it comes to the Over/Under market, there is a lot to be said for going UNDER 166.5 at odds of 1.90. Bet Now!