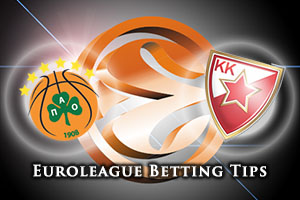 The home side come into this game on Thursday on the back of a win and they’ll be keen to further improve their 1-1 record in the Euroleague so far this season. However, the team from Belgrade will be desperate to grab a win that will break their duck and move them off the 0-2 record that they currently hold in the Euroleague. It could be a tense occasion in Athens on Thursday.

One of the reasons that the hosts will be confident of grabbing a positive result in this game will be in the form of Dimitris Diamtidis and Nick Calathes. They two have helped the team to be ranked third with respect to assists in the league and players like James Gist and James Feldeine have provided the finishing touches when required. The fact that the hosts are currently 5-1 for games played in Athens this campaign means that the home crowd have enjoyed the majority of Euroleague nights this season and they’ll expect Thursday night to be another night of triumph.

The team from Belgrade need a win

Conversely, the team from Belgrade have struggled on the road and their 1-5 record away from home will not inspire a great deal of confidence heading into this game. The fact that Crvena are yet to win the Top 16 will be a worry but it is not as if they don’t have the players who can make a difference. Quincy Miller may be a rookie but he has had a big impact this season and he’ll be looking to make his mark on this game. Maik Zirbes is another player that has been on his game at times this season and he could play a big role in propelling Crvena to a big night.

Unsurprisingly, the hosts are the big favourites for this game and taking Panthianikos Athens at -7.5, at odds of 1.90 should be a good basketball bet for Thursday. For the Over/Under market, you should be looking to go OVER 147.5 at odds of 1.90. Bet Now!