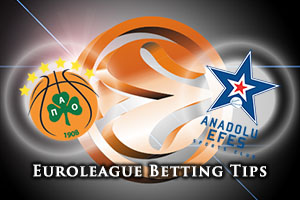 Both teams hold a 3-3 record in the Top 16 and a 9-7 record in the Euroleague season overall, so there isn’t a lot to choose between these two sides. They are big Euroleague rivals and this is a game that both teams will be desperate to win as we move to the halfway stage of the Top 16 campaign.

The home team have won back to back games and another win could just ignite their Top 16 campaign. A home win will see Panathinaikos in the top half of the Group E at the halfway stage of the tournament, so they know what is at stake. Miroslav Raduljica was a massive player for the Athens team last week and if he can maintain that level of form, the Athens fans will be roaring their team on. Nick Calathes and Dimitris Diamantidis are just two of the players that benefit from Raduljica being on form so a lot is resting on Miroslav’s shoulders in this game.

Efes need to get over a derby day defeat

Efes need to bounce back from the pain of losing a home game against city rivals Fenerbahce but they arrive in Greece knowing that they won their last game on the road. Heading into Round 7 in the Top 16, the Turkish side are sat in third place so they’ll be desperate to grab a win that will leave them in a healthy position for the second half of the group stage. Thomas Heurtel and Jayson Granger have been in fine form for the away team and Dario Saric has played his part this season. There are enough players in the Efes team to make a difference to this game’s outcome.

This is likely to be the tightest game of the four taking place on Friday evening and this is reflected in the basketball betting opportunities. You should look to take Panathinaikos Athens at -4, which you can find at odds of 1.90. Anyone looking to take the Over/Under market on will find that going OVER 150.5, which you can find at odds of 1.90, looks to be a decent bet. Bet Now!