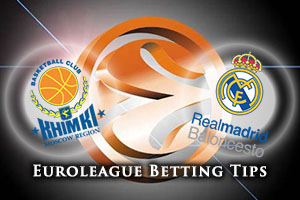 This is the third time these two teams have clashed in Europe this season and the Moscow side have won both of their clashes. This is another tantalising clash between the Eurocup holders and the Euroleague champions, and the hosts will be keen to show their supremacy yet again against a Madrid side that have been a major disappointment this campaign.

A 4-2 record has been a decent return for the Moscow side this campaign and the fact that they are the third ranked team in the Top 16, with an average of 83.8 points per game, says a lot about their season. The fact that they are also well ranked for various defensive elements has to be seen as a positive thing and with players like Tyler Honeycutt and James Augustine finding consistently great form this campaign; it has been a pleasure for the Khimki fans. Defeating the reigning champions at least three times in a season is a tall order but with two wins over Madrid under their belt, the home fans will be calling out for more in Moscow this week.

Madrid really need to get their campaign into gear

Madrid will look at the Khimki scoring record in the Top 16 and suggest that they are not too far behind. This is true and with Khimki sitting in second place in the rankings, the away team is in third place, with an average of 82.2 points per game. However, the Real Madrid defence has been nowhere near as good as their opponents, which is why they have a 3-3 record, and an 8-8 record, overall in the Euroleague season. Madrid still have the players to win games and they have suffered from injuries but you have to wonder if they still have the hunger after last season’s huge campaign?

The bookmakers make the home team slight favourites and you should look to take Khimki Moscow Region at -3.5, which can be found at odds of 1.90. For the Over/Under market, look to go UNDER 167.5 at odds of 1.90. Bet Now!