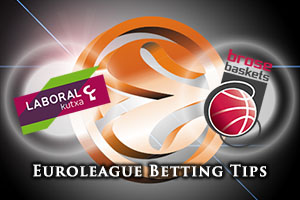 This is the first time that these two teams have clashed since 2006 and both will be feeling quite positive coming into the game. The Spanish hosts have a 4-2 record at this stage of the season and Brose Baskets Bamberg are locked on a 3-3 record, so there isn’t too much between the two teams heading into Thursday evening.

Laboral will be feeling rather confident given that they are on a three game winning streak but it is the quality of opponent they have defeated in this run that will impress them. They have managed to overcome CSKA Moscow, Barcelona and Real Madrid in their last three games. This means that they held a 1-2 record before that run of fixtures, and you have to give them huge credit for achieving success of late. The Laboral run has been based on a strong defence and if they are going to grab a win this week, their defensive work will once again be the bedrock of the performance.

Brose Baskets need to believe in themselves

Leon Radosevic and Dnaiel Theis are the players who have to work hard in limiting what the hosts can do while Nicolo Melli will be looking to get the ball moving around the court. Bradley Wanamaker has been in excellent form for the Germans this campaign and he will be the man that the Bamberg players look to in this game. Nikos Zidsis and Janis Strelnieks will need to offer support, but if they do, this may be the game where it clicks for the away side and things get a bit more uncomfortable for the hosts. There is a lot to play for in this game and Brose Baskets will think that they have a chance.

The hosts are the favourites and taking Laboral Kutxa Vitoria Gasteiz at -6, at odds of 1.90 should help you to have some basketball betting fun on Thursday evening. If you are looking for the Over/Under market, look to go UNDER 159.5 which you can find at odds of 1.90. Bet Now!