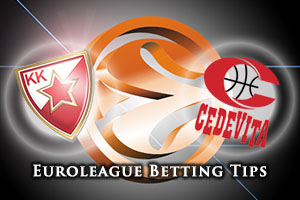 The hosts have a 3-3 record while the away side has a 2-4 record and both of these teams suffered defeats last week that come impact on the rest of their campaign. Zvezda had enjoyed a three game winning run but that ended against Turkish opponents, and they know that they need to bounce back quickly. The Zagreb side cannot afford to become more detached at the foot of the table.

The hosts know that this is an ideal opportunity to find some form and they’ll be keen for Miro Bilan to see as much of the ball as possible. It’ll be tough for Bilan but with James White and Luka Babic alongside him, he should have plenty of support and of course, Quincy Miller has been in excellent form this season. Many pundits have declared that Miller is in the form of his career and if he hits form in this game, the home side will be well on their way to a much needed win. It won’t be an easy game but the home fans will be confident in Belgrade this week.

Zagreb need to find some form before it is too late

Zagreb have lost back to back games, by more than double figures on both occasions, so they may not think that an away game is the best fixture for them. However, a win could transform their season and they’ll be looking for Tarence Kinsey to continue his strong run of form. It is sometimes difficult for mid-season buys to hit the ground running but Kinsey has pleased most of the Zagreb fans and a big performance in this game could see him well on his way to becoming a fans favourite. Jacob Pullen is another player that is likely to be a key player for the away team.

The hosts are big favourites with the bookmakers and taking Crvena Zvezda Telekom Belgrade at -7.5 may not be a bad bet, especially at odds of 1.90. For the Over/Under market, look to go OVER 150.5, at odds of 1.90. Bet Now!