While the Panathinaikos Athletic Club started in 1908, it wasn’t until 1922 that the basketball team started up, making them one of the oldest basketball teams in Greece. While the team has achieved great success in domestic and European basketball, one of the club’s proudest achievements is the fact that they have never been relegated. This means that Panathinaikos have taken part in every First Division Championship in Greece, an accolade that they share with Aris B.C.

While the history of the club refers to the period between 1970 and 1984 as The Golden Age of Panathinaikos, the new millennium has been a successful time for the team. The club won the Greek Championship 9 seasons in a row, between 2003 and 2011 and they also won the Greek Basketball Cup five seasons in a row, between 2004 and 2009, another record. The fact that Panathinaikos hold so many records in Greek basketball is a source of great pleasure and pride to their fans, particularly when you consider the bitter rivalry they have with Olympiacos Piraeus.

When you have a rivalry that is referred to as the “derby of the eternal enemies”, you know that this is a serious encounter and only the rivalry between Barcelona and Real Madrid can match the intensity for non-NBA basketball rivalries, making this a match-up that is watched all over the world when it takes place.

However, since 1997/98, Panathinaikos have been the dominant team in the Greek Championship and it would be easier to tell you the seasons that the Athens team didn’t win the league. 2001/02, 2011/12 and the 2014/15 season were the three non-title winning years since 1997 for the leading Greek basketball team.

However, you shouldn’t just think that Panathinaikos have been dominant in domestic basketball; they have clinched a total of 6 Euroleague titles, the most that any team has claimed in the modern Final Four era of the Euroleague, which began in 1988.

The first Euroleague triumph for Panathinaikos was also the closest, taking the title by just one point in a much remembered and fondly adored triumph against Barcelona. The fact that this was the first Euroleague win for Panathinaikos meant that it was always going to be a special occasion but the nature of the game means that many fans look back on this as being the sweetest of all 6 wins. However, the two titanic battles against CSKA Moscow in 2006/07 and 2008/09 are also fondly remembered by Panathinaikos fans and Greek basketball lovers.

Panathinaikos also lost out in the 2000/01 Euroleague Final and have made it through to the Final Four on 11 occasions since 1993/94. The 2006/07 and 2008/09 seasons were notable for being the seasons where Panathinaikos managed the Triple Crown, clinching the Greek League, the Greek Cup and the Euroleague. Given that Panathinaikos also won the 1996 Intercontinental Cup, a 243-267 three-legged triumph over Olimpia from Argentina, they can rightly claim to be the leading basketball team from Greece. The fact that their Intercontinental triumph came against a team with a name that sounds similar to their closest domestic rivals, there was further reason to celebrate this triumph! 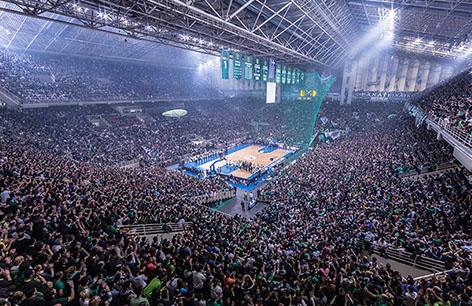 Panathinaikos play their home games at the Athens Olympic Indoor Hall, which is the biggest indoor venue in Greece and the venue forms part of the Athens Olympic Sports Complex. The venue was initially finished in 1995 but benefitted from renovations which took place to upgrade the arena for the 2004 Summer Olympics held in Greece. The Athens Olympic Indoor Hall is regarded as one of the best indoor sports venues in Europe and while the current seating capacity is 19,250 it can breach the 20,000 mark for certain games and events due to standing room.

For many years, the venue held the highest attendance record for a Euroleague game, 20,000 fans for the game against Benetton Treviso in March of 2006. The venue has also welcomed a crowd of 18,900 fans on three occasions, making this a venue with some of the best attendance records in the whole of European basketball.

Games against NBA and Chinese opponents

Some of the most notable players in Panathinaikos history include Fedon Mattheou who played for the team between 1949 and 1955 and Giorgios Kolokithas who played between 1966 and 1973.

Of the current Panathinaikos squad, in the 2015/16 season, players like Dimitris Diamantidis, James Gist, Miroslav Raduljica, James Feldeine and Nick Calathes are integral to the way that Panathinaikos play.

This is the series that caused all of the commotions so far in the Euroleague Playoffs. Fenerbahce are clearly a very strong team in the Euroleague, as their runner-up spot in last year’s Championship proved, but not many people predicted that they would win the opening two games in Greece. Panathinaikos’ home court advantage has... Continue Reading »

We are all set for an excellent evening of basketball action on Thursday night with Game 2 of the Euroleague Playoffs getting underway. There isn’t much time for teams to catch their breath this week and the players roar back into action after having played on Tuesday night. That was a spectacular game of basketball... Continue Reading »

The Euroleague Playoffs get underway on Tuesday and this game, classified as Game B in the schedule, gets us underway. Given that these two teams are amongst the best ranked defensive units in the league means that this may not be the fast-attacking start that many people want to see but it should provide us... Continue Reading »

This is a game that will have an impact on the final shakedown of the Euroleague playoff games as the away team is in the running to grab fourth spot and that final home-court advantage position. The Greeks know that a win gives them the position they are desperate to grab and even though there... Continue Reading »