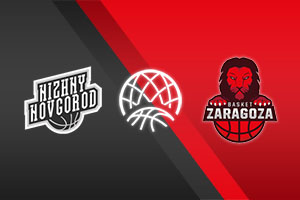 The host of the tournament and the Spaniards of Zaragoza are the only two teams of the quarterfinals that have been crossed each other again earlier in the season. Zaragoza won both games of the regular season; the first 78-75 in November in Spain and then the second 98-92 in Russia in January.

However, Coach Zoran Lukic’s Nizhny tops the list with the best three-pointers teams, averaging 11.3 per game. The Russians are also third on the other side of the court, as they receive only 7.3 three-pointers per game! Nizhny’s Kasey Shepherd (point guard) has scored 204 points coming off the bench, 89 more than any other player in the tournament

Zaragoza are proud that they are one of only four teams to force their opponents to more than 15 unforced errors per game (15.1) and are first in points scored due to opponent errors, averaging 19.7! Luis Casimiro’s rotation in Zaragoza is tight. Ennis, Brussino, Barreiro, Benzing and tall men Wiley and Harris stand out.