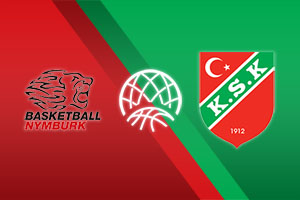 The clash between Nymburk’s and Karsiyaka is another exciting game of the night. Two excellent and ambitious teams, led by two remarkable coaches on their benches. Oren Amiel for the Czechs and Ufuk Sarica for the Turks.

If Nymburk wins tonight, they will become the third team to reach 50 wins in the BCL. The only other teams that have achieved this are Tenerife (65 wins) and AEK (58 wins). Nymburk is first in the tournament in average points scored, with 89.8 points per game. The Czech team has scored 90 or more points in 10 games this year, a record that has been achieved 12 times in the previous four seasons. If they exceed 90 points tonight, they will be the first team to reach eleven 90+ games in the same season!

Nymburk’s Petr Benda, Vojtech Hruban and Martin Kriz are the only players to have more than 70 BCL appearances with one team. Benda has 73, while Hruban and Kriz have 72. Hruban is the all-time leading scorer in the BCL with 902 points!

Karsiyaka’s Raymar Morgan has double-digit points in all 12 of his BCL games, more than any other player. He is the leading scorer of the tournament this year, with a total of 219 points.