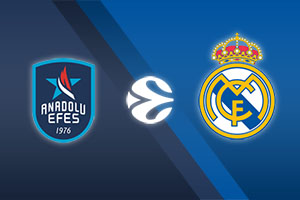 The mother of all battles will take place this afternoon in Turkey. The stakes are high; a place in the Final-4 in Cologne will be decided in the last game of the series between Efes and Real Madrid!

Efes found themselves only a breath away from winning the series last week in Madrid. But the Madrilenians proved again that their jersey is still very “heavy”, returned from games that seemed doomed for them and brought the series back to Turkey. In a few hours, we will know who will check-in the ticket to Germany. Efes is still the favourite of the series and the tournament in general. But to confirm this favourite claim, they need to eliminate first Real Madrid. An elimination that has proved much more demanding so far than what was initially expected. Especially since Efes is arguably the best team in the tournament and started the series full-tilt, post a fantastic second half of the regular season.

“We will beat Real and continue our road to the Euroleague title,” said Ergin Ataman to stimulate the psychology of his players.

All players are ready for war in Efes’s camp. On the other hand, Real Madrid will be reinforced with the decisive centre Tavares, who missed the last three games due to a problem with the adductor. Pablo Laso has been very excited to see the player from Cape Verde training with the rest of the team and has travelled to Istanbul. However, not all is good for the experienced coach; quality power forward Trey Thompkins has been ruled out from this decisive battle.

In the history of this format in the Euroleague playoffs (from the 2008-09 season onwards), no team with the home advantage has ever lost in Game 5, and subsequently the series. In all 10 cases that have occurred. Let’s see if stats will once again tell the truth!