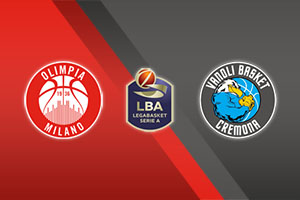 Milan will be in the Final-4 of the Euroleague again after 30 years. In an exciting Game-5 against Bayern Munich last Tuesday, Armani managed to get away with the victory (92-89) and with it came a ticket to Cologne. Shavon Shields played a fantastic game, scoring 34 points and was the main reason they managed to qualify.

Armani has not played for the Italian Basketball League since 25/4; It was then that they beat Pesaro 88-81. Despite holding the second position in the league a few days ago, Brindisi lost both of the postponed games that were pending. Due to this, Armani has been left alone in the first position and will not fall from the top spot, whatever the result tonight will be. Messina’s squad will play without Delaney (PG, 9.7 points, 3.1 assists) and Datome (F, 9.1 points, 3. assists).

Cremona goes into the battle of its last game for the regular season, watching the playoffs “slip out of her hands”. Now, she needs Trento to be defeated in Bologna by Virtus, and at the same time, they need to beat Armani. Quite unlikely, really. Barford (G, 15.0 points, 3.3 rebounds) will not play tonight, causing an extra headache to his coaches.