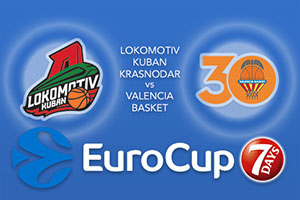 With a 1-2 record welcoming a side with a 2-1 record in this game in Group D, both sides will be desperate for a win in the Eurocup this week. The historical edge lies with Lokomotiv who have a 3-1 record against their Spanish rivals. This includes a 2013 semi-final win when the Russians went on to take the Eurocup. This game won’t match that clash for importance but it is still a vital game.

We are still very early on in the season but Lokomotiv will be desperate to get more wins under their belt and this game provides them with a fantastic chance to do so. Whatever happens in the game it is likely that Taylor Rochestie will be the key player for the hosts as he has managed an average of 14.7 points per game so far this season. There have been other big players for the Krasnodar side this campaign with Kenny Gabriel providing an average of 11.3 points per game and Ian Vougioukas offering up an average of 10.3 points per game and 7 rebounds per game. If these players find form, it could be a long night for the Spanish side.

Valencia want to maintain good form in the Eurocup

However, Valencia have plenty of big players in their side and after two wins so far this season, they’ll see no reason why they cannot grab a third in Krasnodar. Rafa Martinez, the captain, still leads by example and he has scored an average of 13.3 points per game this season. There has also been good form from Bojan Bubljevic with an average of 12.0 points per game this season but he is likely to be absent from this game with an ankle injury. This will place a stronger level of pressure on whoever steps into the side.

This is definitely a game that can go either way so take Valencia Basket at -1, which you can find on offer at odds of 1.90. With the Over/Under market, look to go OVER 151.0 provided at odds of 1.90. Bet Now!