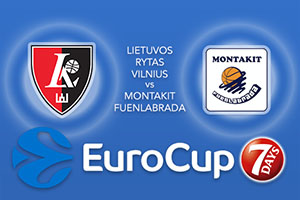 The hosts are still without a win in this game but they will consider this home game to be the ideal chance to change that. This will be the first time that these two sides have clashed and the away team comes into this Group B Eurocup clash on the back of a win against domestic opposition. This is a game that marks the halfway point of the regular season and both teams need to win.

Montakit Fuenlabrada looking for momentum in the Eurocup

The Spanish side enjoyed a win over Bilbao last week, which sets them up well for this clash but they know this will be a very different affair. Any win in the EurCup is to be celebrated but games against domestic rivals take on a very different edge. This tie in Lithuania will be very different and the Spaniards will look for Marko Popovic to have a big game. Popovic has delivered an average of 18.7 points per game this season while Ivan Paunic has offered up an average of 12.3 points per game so far this season.

Both teams will fancy their chances for this match but taking the hosts looks to be a good option. You can back Lietuvos Rytas Vilnius at -5.5 which is provided at odds of 1.90. Anyone looking for the Over/Under market will go OVER 160.0 which is on offer at odds of 1.90. Bet Now!