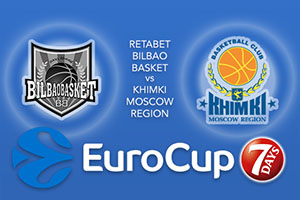 This is a game between a side with a 1-2 record and a team with a 2-1 record and you can forgive the hosts for licking their wounds at the moment. A home game should always be seen as an opportunity to improve your standing in the group but the Bilbao side lost at home in their last game and even worse, this was a Eurocup defeat to a domestic rival. The hosts find themselves under significant pressure in this Group B game and that always leads to exciting basketball betting action.

The Moscow side come into this game on the back of a blank week, so they should be well-rested for this clash. Add in the fact that they hold a 2-1 record and they have welcomed a number of new players to their squad, including Jeremy Evans, Robbie Hummel and Markel Brown, there is likely to be a spring in the step of Khimki. Jacob Pullen has provided an average of 15.7 points per game this season and he has also provided a boost in the form of a contract extension to the end of the season. With Sergey Monia providing an average of 14.3 points per game and EJ Rowland offering up an average of 12.7 points per game, there have been plenty of on-form players for the Moscow side.