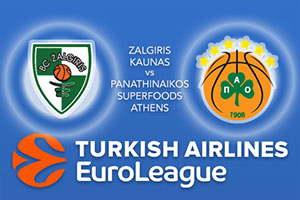 The hosts are two spots outside of the Playoffs and while they are running out of games to move up the table and bag the place they want, there is still a chance. This is why you can expect to see Zalgiris Kaunas going for it in this game against Panathinaikos. The Greeks are well placed for the Playoffs but they know that they need a few more wins to secure their spot, so it is not as if they will be taking things too lightly in this game. All of which means we should have an enjoyable basketball betting occasion in the Euroleague on Thursday night.

These sides have met on 17 occasions and it is fair to say that the Greek side have the upper hand. With 15 wins out of 17, there is no argument about who is the stronger of these two teams historically but that doesn’t mean that Panathinaikos should assume they’ll get the win in this game. There was an 84-76 scoreline between these sides earlier on in the season when Nikos Pappas grabbed the spotlight with 19 points in the victory.

The bookies are finding it difficult to split these sides, which indicates the importance of the game for both teams. You can back Zalgiris Kaunas at +1, which is provided at odds of 1.90. When it comes to the Over/Under market, go OVER 153.0 which is available at odds of 1.90. Bet Now!