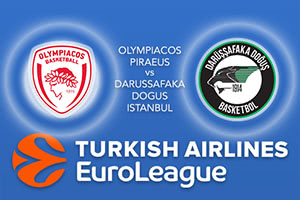 The hosts are in third place and they’ll be more than confident of progressing into the Euroleague Playoffs but this isn’t the case for the away side. The Turkish side currently hold a 12-2 record and they are the team sitting just outside of the Playoff spot. This means that Darussafaka are desperate to grab the wins that will push them into the top half of the table but both of these teams will be fired up on Friday evening, and this could make it a fantastic night for all basketball fans tuning in.

These two sides have only met on one occasion in the Euroleague and this was earlier in the season. The Greek side grabbed a 71-77 in Istanbul and there were big showings from Georgios Printezis and Matt Lojeski. These two players grabbed 15 points and the form of Printezis is likely to be key in this game. Vassilis Spanoulis has been absent from the Greek side’s line-up in recent weeks, but with an average of 12.9 points per game, Printezis has been in good form of late. There has also been good support from Lojeski, who has provided an average of 10.3 points. Olympiacos have four of their last five games, so this is the sort of run of form that provides a side with confidence.

Both teams want to win but you can back Darussafaka Dogus Istanbul at -8, which is on offer at odds of 1.90. If you’re looking for the Over/Under market, go OVER 152.0 which is provided at odds of 1.90. Bet Now!