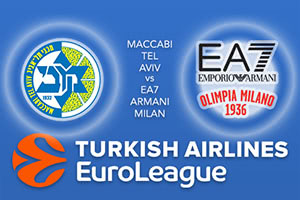 The side that is third bottom in the Euroleague hosts the team that is rock bottom of the Euroleague but both of these sides will still consider they have Playoff ambitions. This means that a win is absolutely crucial but this week could see the end of these teams ambitions.

For Milan, it is very clear. If the Italians lose in Tel Aviv, they are eliminated from Playoff contention but even if they win, they could still be out of the running. A Milan wouldn’t be enough if Baskonia and Efes grab wins this week but obviously the Italians cannot dwell on that, they need to get the win for themselves and see what happens.

Life isn’t much rosier for the hosts in this game because if Maccabi loses and Baskonia and Efes grab a win, the Israeli side are out. In this scenario, a Milan win coupled with wins for Efes and Baskonia would actually see both of these sides dropping out of Playoff contention this week. Given the records of the teams, 8-16 for Maccabi, 7-17 for Milan, you cannot say that this will be a shock or a surprise.

Milan are desperate for a Euroleague win

The teams have met on 11 occasions in Europe and the Israelis have won 7 of these games. Milan did manage to win the most recent outing, clinching a 99-97 victory at the death. Ricky Hickman had an excellent night, offering 22 points in the win.