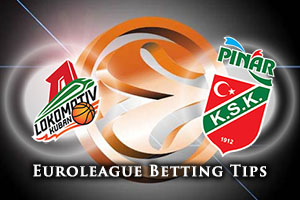 This may be the first time that these two teams have clashed in the Euroleague but they know all about each other. They faced off in last season’s Eurocup, so this will be a game between two teams who want to show that they belong alongside the big boys. Given Lokomotiv’s perfect start, the home side will be confident of winning this game.

The perfect start that Lokomotiv have enjoyed so far this season means that they will be fired up for this game. More good news for the team came with the fact that Malcolm Delaney has been named as the Turkish Airlines Euroleague MVP for October. Euroleague basketball is a team and squad game but when players play well, it can inspire their team-mates and there is no getting away from the fact that Delaney has been in excellent form. Anthony Randolph is still expected to miss out so players like Victor Claver and Chris Singleton will need to step up for the home team.

Pinar need a big win in this match-up

With a 1-2 record, a trip to Krasnodar to face a team that is flying isn’t the best game that Pinar would have hoped for, but they’ll believe that they can have an impact on this game. There’ll be a need to shut down Lokomotiv and this means that players like Joe Ragland and Kenan Siphai will be at the heart of the game plan. There may not be too many people expecting an away win in this clash but with top players Colton Iverson, you will always think that Pinar have a chance to grab something on Friday night.

Taking Lokomotiv Kuban Krasnodar with a -9 handicap, and odds of 1.90, is likely to be a strong option given the team’s start to this Euroleague campaign. For those fans looking to take advantage of the Over/Under market, look to go OVER 149.5 at odds of 1.90 in what could be a pulsating clash. Bet Now!