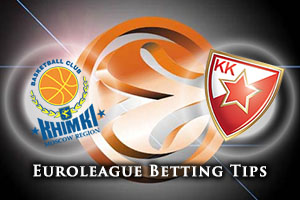 This is the first time that these two teams will have met in a decade and both of the teams will be looking to getting back to winning ways. Round 2 was tough for both teams but this match represents a chance to win, and both teams will think that they have a genuine chance of grabbing the points and putting some distance between themselves and their opponents.

Khimki will be keen to retain their winning record at home and live up to their billing as Eurocup holders. While this is the lesser of the European titles, it still indicates that the team knows how to win games and sometimes the confident that comes from winning matches can make up for other deficiencies. Having defeated Euroleague holders Real Madrid at home in Round 1, the Khimki players, management team and fans will have to think that they have a great chance of winning this one. It won’t be easy but another home win will make people sit up and take notice of what the Moscow side has to offer this season.

Belgrade need to lift their spirits

Belgrade may have lost in Madrid last week but they know that the game is now over and they have to move on. Given that Madrid lost to Khimki in Round 1, it was unlikely that Los Blancos would lose again, at home, in their opening home game as champions. Sometimes the odds are stacked against you and it is how the Crvena side bounce back in this one that will say more about their season than the loss in Madrid. The absence of Luka Mitrovic has been a blow for Belgrade of late but with Quincy Miller now on board, there should be some optimism for the Belgrade side, not that the bookmakers would agree with that sentiment.