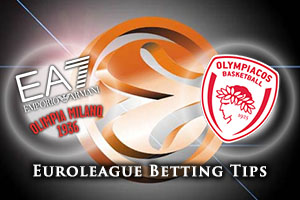 This is the fourth season in a row that these two teams will have clashed, so there is definitely a level of familiarity between the two sides. Whether this makes for a tenser or closer game remains to be seen but with both teams on a 1-1 record for the season so far, you can expect something to give in Milan on Friday.

Both teams have players who played for their rivals last season (Milan’s OIiver Lafayette and Daniel Hackett of Olympiacos) while both teams lost last week after opening round wins. If Milan are to get back to winning ways, it will be likely that Alessandro Gentile and Milan Macvan will be leading players for them. There are also players like Kruno Simon and Charles Jenkins who should provide the foundation for EA7 to go and win this game in front of an expectant crowd, but this is a night where all of the home players have to dig deep and deliver a big standard of performance.

You know what to expect from Olympiacos

When it comes to Olympiacos, you know that there are big name players looking to have an impact on the big moments. Any team with Vassilis Spanoulis in it has a chance and he will be bolstered by Matt Lojeski and Vangelis Mantzaris. The chance to get back to winning ways is one that Olympiacos will be looking to take and this could be another thrilling game between these two familiar opponents. This game is set to the 100th Euroleague game for Georgios Printezis and Spanoulis is still hunting down Euroleague records, needing 9 more three points to grab 300 three-pointers in his career. He would be the 10th player to do so if he can achieve this.

You can take Olympiacos with a -1 handicap, and odds of 1.90, for this game, and this should keep you entertained until the end of the match. For the Over/Under market, you should look to go OVER 152.5 at odds of 1.90. It is likely to be tight but there could well be points in Milan. Bet Now!