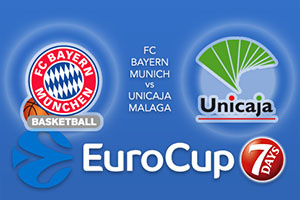 Both of these teams will grace the Eurocup Top 16 but there is plenty to play for in this game. The Germans have a 4-2 record in the tournament so far while the Spanish side carry a 3-2 record. That game in hand could be vital for Malaga but Bayern grabbed a big win Spain earlier this season, picking up a 62-74 win for the Bavarian side. This means the head to head record could push the Spanish side on but the hosts have some leeway to take control of this clash.

The Spaniards will be keen to win in Eurocup

Unicaja know that they would need a big win in Germany to grab the head to head record but their first target must be to win the game. If the Spaniards are likely to win this game it will probably be down to Kyle Fogg, who has provided an average of 18 points per game. The Spanish side have also been boosted by the return of Dejan Musli, who was missing with injury but he has managed an average of 14.8 points per game so far this season.

This has the makings of a tight game but you can take FC Bayern Munich at -2.5, which is provided at odds of 1.90. There is also the Over/Under for this Eurocup and you should go UNDER 161.0 at odds of 1.90 for this Wednesday night clash. Bet Now!