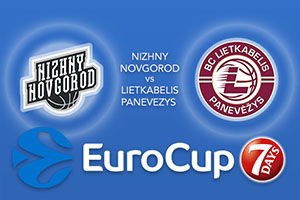 There is only one qualification spot up for grabs in Group A of the Eurocup and the hosts are determined to get the win. Nizhny have a 2-3 record heading into this game while Lietkabelis have a 3-3 record and are assured of a spot in the next stage of the season. The hosts have been on a losing streak of late but this game represents a good opportunity to break that run and give their fans something to celebrate.

The clash between these two sides earlier in the season is the only time these two teams have met. That game was won by Nizhny by a score of 72-75 and this will give the hosts confidence that they come out on top on Wednesday night. A home win will be enough for Nizhny to take the last spot but even if they lose this game, a victory for Cedevita Zagreb over MZT Skopje Aerodrom will be enough to leave the home fans smiling at getting through the group stage. Ivan Strebkoc has been in fine form, offering up an average of 15.6 points per game for the hosts while Deandre Kane has chipped in with an average of 14.8 points per game.

Lietkabelis Panevezys will extend their stay in Eurocup

The away side will be slightly relaxed knowing that they have booked safe passage through to the next stage of the Eurocup but they’ll also be keen to win games and move themselves up the table if possible. Whether this is enough hunger to match the desire that the hosts will surely show remains to be seen but with a 3-3 record so far this season, the away team doesn’t want to drop down into the final qualifying spot. Ksistof Lavrinvoic has provided an average of 13.5 points per game and an average of 6.2 rebounds per game, so he is likely to be the key player for Lietkabelis if he gets involved in this game.