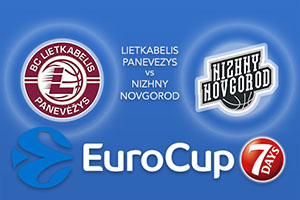 The hosts are two games into their Eurocup campaign and have two wins out of two, so they’ll be in confident mood heading into this game. Nizhny have only played one game so far, which they lost, so they’ll be looking to improve on that status on Wednesday evening.

Nizhny need to bounce back strongly

Nizhny Novgorod had a week off last week. Some teams are desperate to get back on the court after a defeat while other teams prefer to lick their wounds and work out what went wrong. It will be interesting to see how they respond after their time off, but they’ll be hoping for DeAndre Kane to lead from the front. He grabbed 21 points in the opening game, but this was a match that they still lost by 26 points. When you consider that Nizhny were at home in this game, giving up 106 points isn’t a good sign. They have had some time to work on their defensive shape but whether it is enough remains to be seen.

The hosts are tipped as favourites for this game but the bookies think it may be a close affair. Look to take Lietkabelis Panevezys at -4, which is provided at odds of 1.90 for this Wednesday night game in Group A. For the Over/Under market, look to go OVER 173.5, which is provided at odds of 1.90. This is based on the abysmal defensive showing by Nizhny in their last game and a desire of the home team to punish them. Bet Now!