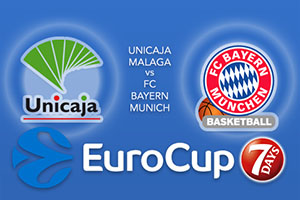 Group C is definitely shaping up to be a hugely exciting EuroCup group and you only look to look at the caliber of teams on offer. These two sides haven’t met on Euroleague duty before but they have played each other in the Euroleague, where they both won a home game back in the 2013/14 season. We could be in for quite a night in the Martin Carpena Arena on Wednesday night in Malaga.

Last week was the first ever time that Unicaja Malaga played in the Euroleague and they grabbed an all-important away win, giving them a 1-0 record heading into this clash. This means this is the first ever Malaga home game in the EuroCup, and it is going to be a big challenge. Jamar Smith picked up 19 points in that win while Dejan Musli offered up 16 points. With Dani Diez providing 12 points in the win, there are a few players that can cause some damage, which is exactly what the Malaga fans are hoping to see in this game.

Bayern want an away win in Malaga

Bayern come into the game with a 1-1 record and their scoring charts are led by Devin Booker. Booker has averaged 19 points per game while Danilo Barthel and Vladimir Lucic both have an average of 11 points per game. Bayern have shipped an average of 82 points per game in their opening two matches, so this is something that they need to work on going into this game. This will be a game that Bayern will feel as though they can win but it is also going to be a game where they will have to work extremely hard against top class opposition.

While there is an argument to be made for both sides coming into this game, you get the impression that the hosts hold the upper hand. With this in mind you should take Unicaja Malaga at -5.5, which is provided at odds of 1.90. Anyone looking for the Over/Under market will find that going OVER 158.5 which is on offer at odds of 1.90 should be a decent bet. Bet Now!