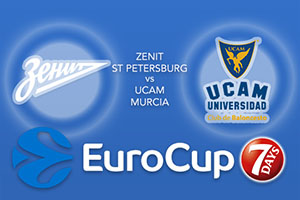 This is the first time that these two teams have met in the Eurocup and this looks like being one of the tightest groups in the regular season. This means that all of the games are likely to be important and both teams will feel that there is a great deal to gain by taking the win from this match if they can.

Zenit come into this game with a 1-0 record, and they’ll be confident of adding to it this week. This is their second home game of the campaign, so this is a game they’ll be looking to win to propel them into tougher games with more confidence. In that earlier win, Janis Timma grabbed 20 points, Sergey Karasev picked up 16 points and Aaron White delivered 13 points. The side from St Petersburg will be confident in their home games and they receive a lot of backing. Another home win will give them a great chance of going far in this season’s Eurocup.

Not too many teams enjoy playing in St Petersburg but Murcia have to see this game as a challenge. They come into this clash with a 1-1 record, having triumphed at home but then losing away from home. Facu Campazzo has averaged 13.5 points per game this season while Jose Angel Antelo can offer an average of 12 points. Vitor Benite has also chipped in, providing an average of 10 points in the two games this season. Giving up an average of 84.5 points in their two games so far hasn’t helped the Murcia side and they’ll be looking for an improvement in this game.