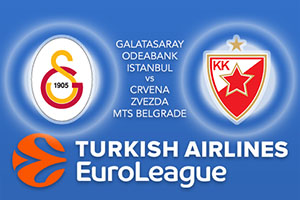 This Friday night clash is a game between two teams that lost in their opening fixture of the Euroleague season. It is the sort of game that both teams will recognise as a chance to win, so there has to be some attacking play and desire shown in this game. When it comes to good basketball betting options, that is sometimes all you need.

This is the second home game of the season for the Istanbul side and after they lost their last home match, they’ll know that they need to get off to winning ways here. There is no shame in losing to CSKA Moscow, they are the reigning Euroleague champions after all, but if you lose two home games in a row, you’ll start to be worried about the season. In that opening game of the season, most of Galatasaray’s attacking prowess focused on Sinan Guler, who managed to provide 16 points and Alex Tyus, who offered up 15 points. If these two players can deliver again, while being better supported by their team-mates, there is a good chance that the home fans will gave something to be smile about.

The Belgrade side will look to offer more this week

The Belgrade side lost out at home last week to Darussafaka, so this is the second week in a row they are lining up against opposition from Istanbul. While the loss was disappointing, one player that shone for Zvezda was Ognjen Kuzmic, who was making his debut for the side. He managed to deliver 16 points, which is not a bad offering for your first game for a side. There was also 13 points from Marko Guduric, and these are the players who will have to offer a bit more for the Belgrade side if there is going to be a good away showing in this match.

It isn’t that often that Galatasaray will serve up two poor showings in a row so look for the hosts to take this game. You can find Galatasaray Odeabank Istanbul at -7.5 which is provided at odds of 1.90. There is also the Over/Under market, where you should go UNDER 150.0, which is available at odds of 1.90. Bet Now!