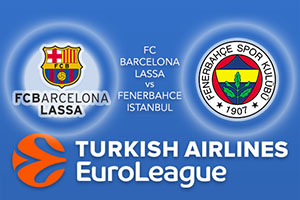 The final Euroleague of the second round of fixture stakes place on Friday night and it is a clash between two sides that are at the top of Euroleague teams. Both of these teams managed to win their opening game of the campaign so there will be someone coming away with a 2-0 record at the end of this game, and both teams will fancy their chances of doing so.

Barcelona got off to a strong start in a tight game last week but the 10 steals that they made was the highest of any team. This gave the opportunity to win the game and give their best players the chance to shine. Justin Doellman had an excellent evening with 23 points while there were strong showings from Juan Carlos Navarro and Ante Tomic. Both of these players served up 13 points in the win but worryingly for the Catalan club, Navarro may have to sit this game out due to an injury. Barcelona have a strong enough squad to deal with an injury or two but they’ll still miss a top player.

Fenerbahce know they can win in Catalonia

Fenerbahce squeezed out a one point victory at home to Brose Bamberg last week. It was hardly the most ringing endorsement of the team’s ability but it was a win, which is the most important thing. Bogdan Bogdanovic got his season off to a flying start with 18 points. There were three players who delivered 10 points each in the game with Jan Vesely, Pero Antic and Ekpe Udoh all playing their part in the narrow win. Vesely is likely to be up against Doellman and this could be one of the clashes of the week, so make sure that you set aside some time to catch this.

This is genuinely a game that could go either way and both sides have the capabilities to win this clash. Take Fenerbahce Istanbul at +1.5, which is provided at odds of 1.90. If you’re looking for the Over/Under market, look to go OVER 151.0 which you can find at odds of 1.90. Bet Now!