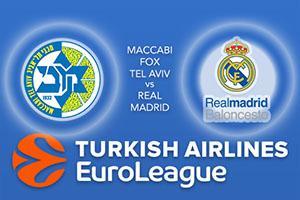 This is a game that has been played out many times in the history of the Euroleague and of course, it was the 2014 Euroleague Championship game. With 14 Euroleague titles between them, with 5 for the Israeli hosts of this game and 9 for the Spanish giants, this is a clash between two teams who know all about winning this tournament.

While Maccabi Tel Aviv lost out in their opening Euroleague game of the season last week, they shouldn’t feel too bad. They grabbed 97 points in Milan, which is something that a lot of teams will struggle to do this season. However, there is a need for the Tel Aviv side to brush up on their defensive work. If Maccabi can lock the back door better in this game, they’ll significantly improve their chances of taking something from this game. The strength of the hosts lies in their attacking options but solely relying on the attackers to score more than the defence lets in is a tactic that regularly comes unstuck in the Euroleague.

Real Madrid will want to keep on winning

Real Madrid eased into the new season last with a comfortable win over Olympiacos Piraeus and they’ll be looking to maintain this form and confidence in this game. It is always a tough task in Israel but given that Madrid gave away the second lowest points tally last week, they’ll be feeling good about themselves at both ends of the court. Sergio Llull managed to grab 22 points in the win last week and he can always be relied on to make a difference in big games. There is also a lot of hope being placed on Luka Doncic, and he managed to grab 11 points in last week’s win. Madrid should feel as though they can go 2-0 this week.

You’ll find that Real Madrid are more than capable of claiming this victory which means you should look to take the Spanish giants in this game.