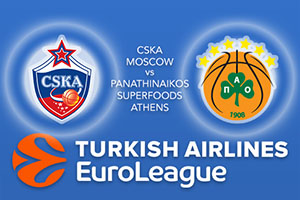 This game sees the reigning Euroleague champions play their first home game of the season but this is a clash between two teams who know all about winning the Euroleague. There are 13 titles shared between these two clubs and of course, they both won their opening fixture in this season’s campaign. There could be quite a battle in Moscow on Friday night if these two sides play to a good level.

The Euroleague champions set their best points total this century in grabbing 109 points in the away win against Galatasaray. Turkey can sometimes be a difficult place to pick up points but yet again, CSKA Moscow showed that they power through the regular season without stopping to catch their breath. Nando De Colo was the Euroleague MVP last season and he has started in the same fashion, grabbing 22 points in the win. Of course, while De Colo leads, he can rely on the support of Milos Teodosic who managed to provide 20 points and 11 assists for a double-double in last week’s game. Aaron Jackson also managed to deliver 16 points for the champs last week and if these players step up again this week, there is every chance that CSKA Moscow will another great night.

Panathinaikos will want to grab a win against the champions

However, Panathinaikos are not going to roll over and let the Russians claim a win with little effort. You can expect Nikos Pappas to be on top for, and he managed to provide 19 points in the win last week. There was also support from Nick Calathes and Chris Singleton who both managed to grab 13 points each in the win. This is going to be a game with a lot of big players on the court so you can expect a physical and bruising encounter. Both of these sides know how to play good quality basketball as well but if it comes down to a brawl, there will be no backing down from either side.

There looks to be no stopping the Russians at the moment and this is definitely the opinion of the bookmakers. This is why you should take CSKA Moscow at -13.5, which is available at odds of 1.90. If you’re looking for the Over/Under market, you should go OVER 165.5 which is provided at odds of 1.90. Bet Now!