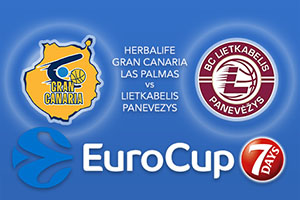 As both of these teams have a positive record coming into this game, there will be no shortage of confidence in Las Palmas but the home team will fancy their chances of success in this outing. This should be one of the best games in the Eurocup this week so if you fancy great action alongside your basketball betting, this should be the game to watch.

The hosts have a 2-0 record so far this campaign and they’ll be keen to maintain that undefeated record in this game. Kyle Kuric has grabbed an average of 23 points per game and he has also taken the weekly MVP award for both of the games that he has played this season. If he is able to deliver another showing of that calibre, this will likely be a game where the home fans are celebrating long before the end of the clash. Other players who have supported Kuric include Eulis Baez, who has grabbed an average of 13 points per game so far this season and Pablo Aguilar, who has picked up an average of 12 points per game.

Lietkabelis Panevezys will be looking to bounce back

Gran Canaria are clear favourites for this match and they should be in clear control of this game long before the end of the match. You should back Gran Canaria at -16.5 which you can find at odds of 1.90. When it comes to the Over/Under market, look to go OVER 169.0 and this is provided at odds of 1.90. Bet Now!