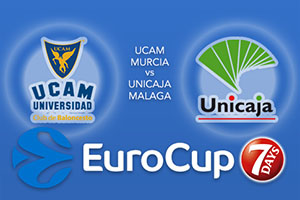 This is a game between two Spanish sides, which will add a touch of local flavour to this Eurocup match. The hosts hold a 2-1 record in Group C while the side from Malaga bring a 1-1 record to Murcia with them. These sides will know each other very well and both will believe that they can grab the upper hand and boost their chances of progressing in the Eurocup.

This is the first time these two sides have clashed in European activity and the hosts will feel they have the edge heading into this game. One player that will be keen to make his mark on the game will be Facundo Campazzo. Campazzo has averaged 16 points per game so far this season while also clocking up an average of 9 assists per game. If there is one player that is going to make a big difference to the outcome of the match, it is likely to be him. Other players who have performed well for the hosts this season include Vitor Faverani, with an average of 10 points per game and Billy Baron, who has provided an average of 9 points per game.

While some fans will tell you that you are as well flipping a coin to decide the outcome of this game, we look to provide you with something a little bit more insightful when it comes to basketball betting.