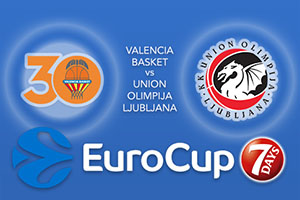 While the hosts come into this clash with a 1-1 record under their belts, their opponents have played three and lost three, so they’ll be starting to feel the pressure in the Eurocup. When it comes to historical clashes between these two sides, Valencia have won both games, so this will provide them with another edge in what could be a straightforward outing on Wednesday.

This is exactly the sort of home game that teams need to claim a win in a convincing manner, so there is pressure on Valencia, but they should be able to get the win they are looking for. Bojan Dubljevic has been in fine form this season, managing 11 from 11 free throws, and he has helped Valencia to pick up a 91.3% record. Rafa Martinez has also been in excellent form, delivering an average of 15 points per game, a tally which will give the Spanish side confidence heading into this clash. The home crowd will expect a comfortable win in this game but Valencia should have enough to help them go home happy.

It could be a long night for the Ljubljana side

It is starting to look a bit desperate for Union and if they fall in this game, a 0-4 record starts to look very daunting. They do have players that can make a difference though. Nikola Jankovic has provided an average of 12.7 points per game this season and Drazen Bubnic has sneaked into double figures with an average of 10 points per game. These two players will need to be on the top of their game because they face a team that has the second-best defence in the whole of the Eurocup. It is likely to be a frustrating evening for the away team but they have to keep plugging away at the game.

The hosts are massive favourites for this game, the question isn’t who will win but how much Valencia will win by. On these lines, look to back Valencia Basket at -19.0 which is provided at odds of 1.90. When it comes to the Over/Under market, look to go UNDER 158.5 which you can find at odds of 1.90. Bet Now!