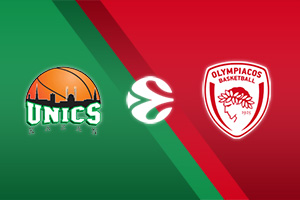 Unics (along with Real) are the two most formed teams in the Euroleague, with the Russians (record 7-5) going to today’s game coming from 6 wins in the last 7 matches!

Olympiacos (8-4) crushed Armani in Milan (72-93), after making 18 three-pointers (record for the Reds in the Euroleague). At the same time, Greek forward Larentzakis had a career record night with 18 points (5/8 three-pointers)! This was the first away victory for Bartzokas’ team in this year’s marathon and the truth is that it came at the best moment for Olympiacos. Tall American Quincy Acy is also ready for tonight’s match.