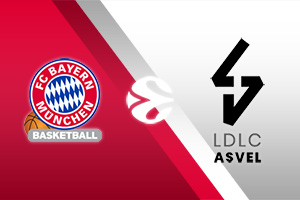 Bayern (5-7, 12th) deserved something better last week in Moscow. Andrea Trinchieri’s team had the upper hand in the scoreboard for the most part of the match against CSKA but in the end they lost 77-74; after Lucic, missed a free three-point shot, in absolute contrast to the match against Panathinaikos two weeks ago. Veteran forward Paul Zipser is knocked out from the beginning of the season. But Croatian center Radosevic seems to be returning to action.

Villeurbanne (7-5, 8th) proved to hard to die in the French “civil” against Monaco in the Principality last week. William Howard’s incredible three-pointer from the center of the court shaped the final 85-84 against Monaco, lifting significantly the morale of the players of TJ Parker; they were obviously not very inspired after the recent defeats and the significant absences.

American scorer Marcos Knight and tall man Osetkowski are not counted for tonight’s game either (due to covid–19). Guard Lacombe and veteran playmaker Diot are returning, while center Morgan and important forward, Lighty remain out due to long standing injuries.