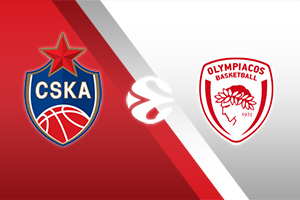 One misfortune event follows another for CSKA (3-1), but the Russian team resists…

Following the severe injury of Serbian center, Nikola Milutinov during the match against Armani Milan, last week they lost another key player, forward Georgian power forward Tornike Sengelia. Sengelia has been ruled out for the next two months due to a severe shoulder problem.

Sengelia was injured in scoring 33 points against the Crvena Zvezda (78-76).

On the other hand, tall American man Kenneth Faried arrived in Moscow and already played a game for the VTB League (against Parma Perm away). In 11 minutes of play, the “Manimal” had 0/2 shots, 0/1 2 points and 3 rebounds in the 60-83 victory for CSKA.

Coach Bartzoka’s Olympiakos (3-1) defeated one of their demons in Faliro last Friday; after three consecutive defeats in the Euroleague, Olympiakos prevailed over the Lithuanians of Zalgiris Kaunas (83-68)! In the Greek Basketball League, Olympiacos keep winning games quickly. They beat Promitheas in a match that mainly reminded them of a post-game routine (108-75). Bartzokas is happy to receive an empty medical report ahead of tonight’s game.