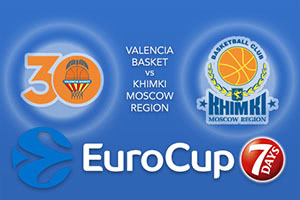 This is a game between two sides that know how to win the EuroCup, sharing five titles between them. We have reached Game 3 in this series thanks to both sides winning their home games to this point. It was an 88-82 win for Valencia in the opening game of this clash but in the most recent game, Khimki enjoyed a massive 98-74 victory in Moscow. Of course, the margin of victory doesn’t matter in a Best of 3 series, the only thing that matters is getting the win and that is what both sides will focus on in this clash. As the home side, Valencia start as favourites but the Moscow side will be buoyed by the win last week, so we could be in for an exciting evening on Wednesday night.

Valencia were riding a 13 game winning streak when Khimki defeated them last week, so all good things must come to an end. This is the ideal chance for Valencia to bounce back but when you lose a game after a long winning streak, you sometimes struggle to get back into the groove. This is something that Valencia needs to guard against and it is something that Khimki will look to capitalise on.

Khimki looking for another EuroCup win

Valencia have the second best defence (at home) in the EuroCup this year while Khimki have the best offensive record, so this should be an intriguing clash. Bojan Dubljevic has provided an average of 11.6 points per game this season but he is the only Valencia player to reach double figures. Khimki will rely on Alexey Shved for points and as he has notched an average of 22.2 points per game so far this season, he is more than capable of delivering the goods.

While both teams will think that they have a great chance of progressing to the semi-finals, it is the hosts who start favourites. Back Valencia Basket at -5, which is provided at odds of 1.90. If you’re looking for the Over/Under market, go UNDER 164.0 which is on offer at odds of 1.90. Bet Now!