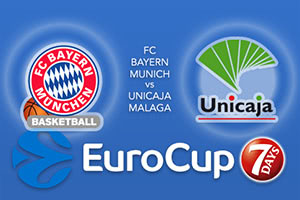 Only two of the four EuroCup quarter-finals have made it to the third game, so the two Wednesday night games are definitely in do or die territory. The final game in this clash takes place in Germany and as home advantage has been a key factor in both of the games played so far in this round, FC Bayern Munich will be hoping for more of the same but they know that they need to bounce back after losing out to Malaga last week.

Bayern had won 10 games in a row before taking on Unicaja Malaga in Spain but the 82-67 win for the hosts in Game 2 of this series snapped that run. There is every chance that the Germans can go on another run but they may have a wobble or two. Sometimes when you have a winning run, the momentum can make you feel invincible but as soon as the winning run comes to an end, it can take a while to be at your best again. The Germans need to bounce back immediately.

There will be a spring in the step of the Malaga players. They know that they never lost out in front of their home fans and can be a bit more relaxed about this game. There is no reason why they cannot defeat Bayern again and although this game will be a much tougher challenge, it is far from an impossible task. Dejan Musli offered 15 points in the win last week and if Musli can deliver again this midweek, there could be a shock on the cards.

Malaga are dreaming of EuroCup success