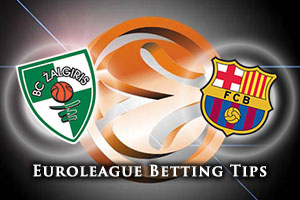 Bottom plays third in this huge game for the away side. It has been a tough campaign for the hosts but they did enjoy a win against the Catalan club after many years of failure. This is the fourth time these two sides have clashed this season so there will not be many surprises on offer in Kaunas on Thursday evening.

The Kaunas side had lost 15 games in a row to Barcelona before they grabbed an 88-92 win in Catalonia in Round 9 of the regular season. That was a massive result and a big part of the scoreline was down to Paulius Jankunas who grabbed 17 points that evening. Mind you, there were five away players on the night reaching double figures so there were many heroes on a very proud evening for the Kaunas side. That was a legendary win but a win in this game would have a bigger impact on their opponents and Kaunas will be going all out to cause more trouble for Barcelona.

The Catalan club is keen on victory

If Barcelona wins the game, they will take third place in the group and the fate of Brose Baskets Bamberg and Olympiacos Piraeus will be automatically decided. These teams play later on Thursday evening and then on Friday respectively, so there will be a lot of interested parties in this game in Kaunas. If Barcelona loses, they can be eliminated if three other results go against them. If the Catalan side loses and then Bamberg win, Khimki Moscow Region win and Olympiacos Piraeus win, Barcelona will slip out of the playoff places and their European adventure will be over for the season. This string of results may be unlikely but it is possible, so Barcelona need to do what they can, and their progress is in their own hands, to make sure that they are still playing Euroleague basketball after this midweek.

You have to think that the Catalans will take control of their own destiny so look to take FC Barcelona Lassa at -8.5, which you can find at odds of 1.90. For the Over/Under market, look to go OVER 154.5 which is on offer at odds of 1.90. Bet Now!